Norley Primary School is a modern purpose built school situated near the centre of Norley in Hough Lane. The school opened to pupils in April, 1989 following the closure of the old school building in School Lane. The new school was officially opened by the Lord Bishop of Chester, The Rt. Rev. Michael Baughen on Wednesday 4 October 1989.

The old school, the "Norley Anglican Church School" became a day school in 1844. Photographs of the old and new schools are shown below (derived from the book "Norley - a Village Alive" with the kind permission of the book's author Dr Gladys Archer).

So what was it really like at Norley School in days gone by? Two local residents tell their stories:

There is at least one family where 4 generations have attended Norley School (in one form or another). That is, Doris Clark, her son Brian, his son Alan and again Alan's son! Three of them were taught by Mrs Pearson! In the picture below, I can identify my mother, Kathleen Neald. She attended during 1925 when this picture was taken.. She is second row from front, fourth from the right! There's Bill Jones smiling in the centre of back row. Can anyone identify the others? 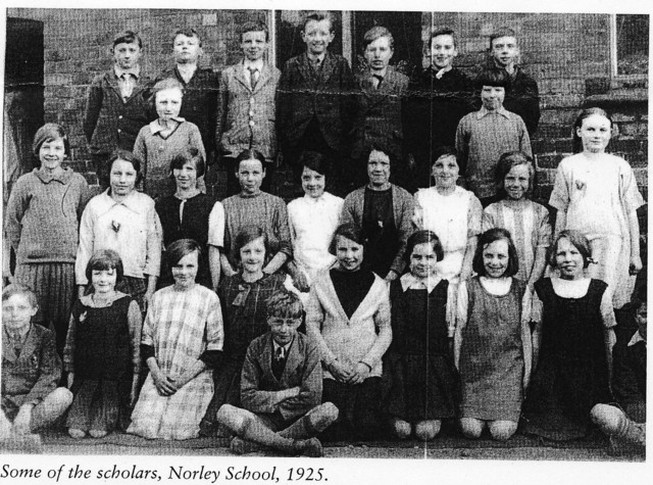 I attended the old Norley School in School Lane starting in 1944 from the age of 5 to 11 years. There were only two classrooms and two teachers for about 40 children. Mrs Pearson was my teacher. I remember two shelters were available for use during the war. Among those attending I remember my brother Michael Kay, Catherine Lewis, Christine Wright, Alan Robinson, John Lewis and Joan Hignet. Does anyone remember anyone else in the photo below? 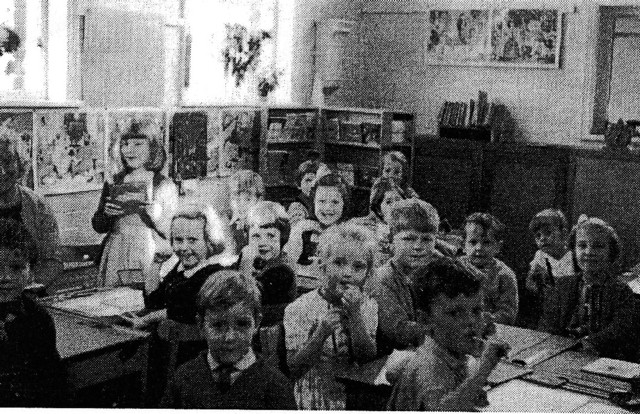 Things were strict. We did Sums, reading, English, Writing and Football (without girls) oh, and Church and we had playtimes. We went occasionally to Delamere Forest for walks. I remember we had free time on Friday afternoons when the boys absconded to the fish ponds or sledging in the Winter.

Attendance was generally good, but when we were required for work at home or on the farms some children were withdrawn, p'raps to plant potatoes or for harvest time.

School dinners consisted of Potatoes, Veg, Meat and puddings of semolina and prunes and custard! Millie Thompson was cook.

The toilets...were emptied only twice a week by the Council!

I remember some children being ill with Chicken Pox, Measles, Mumps and on occasion Whooping Cough. As far as I can remember there were no 'jabs' to prevent these.

I became stand-in caretaker at the present Norley CE Primary School in Hough Lane during 1977-1978, when the permanent caretaker became ill. I took up the permanent position in 1979 and worked until 1983 when a cycle accident forced me to give up.

As Caretaker in those days I worked alone. Floors were polished, tables and chairs cleaned and FIRES STOKED each day. Hours were 8:30 to 10am and 3-6PM. A weather-eye was kept on school security and little escaped me.

The games children played were Hide and Seek, Skipping, Hopscotch, Sewing, Ball Games and Rounders, with football for the boys.

My daughter attended. As she and one other girl were short of books for sums, others more appropriate were obtained from Northwich.

Ethel Harvey was cook and dinners were produced each day on school premises, but I was not allowed into the kitchen.

Shown below is one of my wage payment slips from 1983.

If you have any interesting memories of Norley School, please do send them in and we may publish more on this web page. Many thanks to Mary and Trevor and to Brenda Evans who pulled all the information together.